Empowering children to recognise and report trafficking in human beings 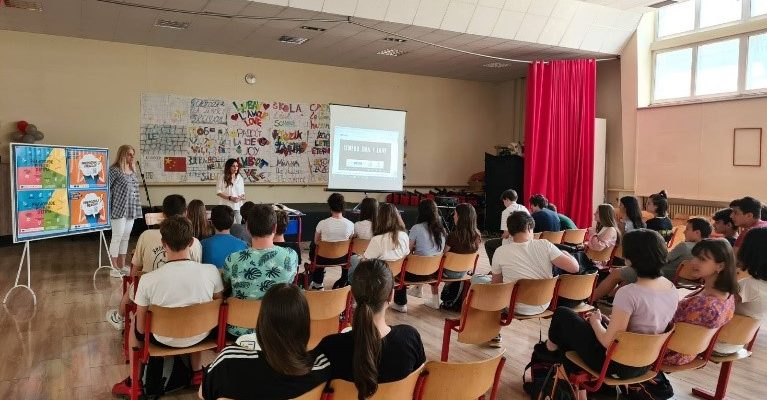 The Child Rights Centre (CRC) has concluded a series of 20 workshops for 478 children in primary and high schools across Serbia, as well as in the SOS Children’s Village Kraljevo, on the topic of prevention and protection of children against trafficking in human beings. The workshops were held since November 2021 under the project “Empowering children to recognise and report trafficking in human beings in the Republic of Serbia“ implemented by the CRC in co-operation with the NGO Atina and with the financial support of the European Union and the Council of Europe as part of the joint programme “Horizontal Facility for the Western Balkans and Turkey 2019-2022”.

The children between 12 and 18 years of age participating in the workshops were asked to describe how they see human trafficking, and why it represents a danger for children. They discussed their feelings, dreams and fears, who and what could prevent them from fulfilling a dream, who their persons of trust were, how they could recognise that their loved ones were in trouble and whether and how they reacted to such situations.

Talking to the children, the CRC came to the conclusion that even though they were aware about the phenomenon, they were insufficiently informed about of trafficking in human beings and their knowledge of the topic boiled down mainly to what they heard from their parents or saw in movies.

“It is, for example, my friend and I are walking down the street and someone grabs us, puts us in a truck and takes us far away. They sell us there and make money.” (Boy, 14 years old)

“Children are at the highest risk. Because they are small. They believe everyone.” (Girl, 13 years old)

“Some children live in the street. I think they may be someone’s victims.” (Boy, 15 years old)

Gender stereotypes are often present in their reasoning of a greater vulnerability of girls compared to boys; they believe that girls are at greater risk because “boys are stronger, so they can defend themselves.”

“I think that girls are in the greatest danger. They can’t defend themselves.” (Boy, 14 years old)

“Girls are more attractive to traffickers because they look weaker and can be forced into marriage.” (Boy, 12 years old)

Children often imagine a human trafficker as someone who wears a hoodie and lives in a dark place, but they also think that they are people who were not much loved as children, and that they are good at pretending to be our friends.

“Human traffickers are neglected people. These are people whose emotions have not developed in a healthy way.” (Girl, 15 years old)

Children understand why victims do not report a trafficker immediately.

“I think that victims are ashamed. I believe they would admit it sooner if they were not condemned by others.” (Girl, 17 years old)

“Out of fear. She is afraid. The trafficker must be blackmailing her.” (Boy, 15 years old)

As regards the mechanisms of protection, most children would first turn to their parents or the police, and few of them know that they can get such kind of help from non-governmental organisations. When it comes to protection on the internet, children’s first choice would be to call the helpline for the safety of children on the internet – 19833.

The conclusion of all the workshops is that many children have not had previous opportunities to talk openly about this topic.

“Nobody talks to us about these topics. Now I realise how unsafe children are.” (Girl, 15 years old)

They find all the information very useful and think that it would be good to have more workshops like these and to talk more about this topic in schools.

The video “Between Dreams and Reality” and the interactive digital platform “Protection of Children from Human Trafficking”, the tools developed by the CRC in cooperation with the NGO Atina and with the financial support of the European Union and the Council of Europe in 2021, were an indispensable element of the discussions and of presenting to children the mechanisms of protection and the ways to recognise and report trafficking in human beings. The CRC will continue to promote the digital platform in their campaigns and educational workshops focusing on preventing human trafficking.

The Child Rights Centre is a beneficiary of the grant awarded within the joint programme of the European Union and the Council of Europe “Horizontal Facility for the Western Balkans and Turkey 2019-2022”. The views expressed in this text are the responsibility of the author can in no way be taken to reflect the official opinion of either party.