Director of the Child Rights Centre at the World Congress on Justice for Children in Paris, France, presented Serbian experience in implementing diversionary mechanisms developed as part of the reform of the juvenile justice system

Director of the Child Rights Centre Ines Cerovic participated at the World Congress on Justice for Children in Paris, France, from 28 – 30 May 2018. On this occasion, Ines Cerovic presented Serbian experience in implementing diversionary mechanisms developed as part of the reform of the juvenile justice system through two interlinked projects: the first that was carried out with donor support from the Norwegian Ministry of Foreign Affairs and implemented by International Management Group – IMG  – from 2010 to 2014, and the second with European Union support through IPA funds, implemented by UNICEF in partnership with ministries in charge of justice and social welfare – from 2014 to 2017. The Child Rights Centre participated in implementation of both projects. 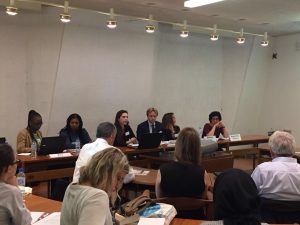 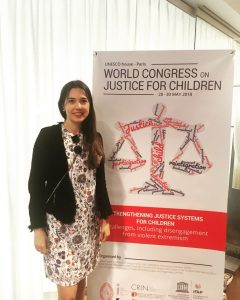 The presentation was made as part of the panel “Keeping them out of the system: Promoting diversionary measures for children in three continents” which was led by professor Ton Liefaard, UNICEF Chair in Children’s Rights at Leiden University, Leiden Law School, The Netherlands. In addition to Serbian experience, experts from Juvenile Law Centre from Philadelphia presented US experience on improving juvenile justice system, whereas experts from the Centre for Child Law from University of Pretoria presented how diversions are implemented in South Africa.

Ines Cerovic showed how the number of ordered diversions increased from 1,69% of all criminal charges  in 2010 to 28% in 2016. This was achieved by building multisectoral cooperation through establishment of the so-called ‘juvenile justice teams’ and extensive capacity building of all relevant professionals, drafting the missing secondary legislation and developing comprehensive standards and procedures for implementation of diversions in order to bridge the observed lack of formal bylaw and enabled application of diversions in practice.

The reforms further focused on increasing quality of implemented diversions through specially designed interventions with child offender and his/her family. Interventions are community-based and stem from a highly multi-sectoral process, and are implemented in a holistic and systemic way, viewing a child as part of the system in which he/she belongs. The approach is strength-based and resilience-oriented, based on a view that each child, even one with the most complex problems and disadvantages has potential to develop positively when connected to the right combination of opportunities, supports and relationships, with full participation of children throughout the whole process.