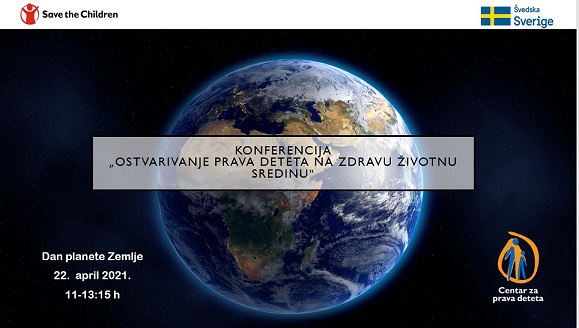 “You are telling us that we are the future, but how are we supposed be the future if our present is threatened?” – Una Ljiljak, member of the Child Rights Centre’s DX Club

On the occasion of Earth Day, which is on 22 April, in order to draw public attention to the importance of preserving and protecting the environment, but also to a large number of environmental challenges, the Child Rights Centre (CRC) held a conference entitled “Realising the child’s rights to a healthy environment.”

The conference gathered a significant number of experts who presented their experiences and challenges in realising the child’s right to a healthy environment, thus raising many important issues in this area. The participants had the opportunity to hear also the opinions of children and young people about the degree of exercising their rights.

Ana Prodanović from UNICEF spoke about the lifelong impact of climate change on children’s health and stressed the importance of intensive and joint action of all stakeholders, particularly young people in every phase of the environmental protection process. Gordana Ilić, representative of the Protector of Citizens, also highlighted the importance of children’s participation and presented some of the participatory activities performed by the Protector of Citizens.

Zorica Milosavljević, President of Citizens’ Association Zlatiborski krug and biology teacher in the Primary School Dimitrije Tucović from Čajetina, and Milan Dakić, representative of the Provincial Protector of Citizens, said that environmental education must be included in the compulsory curriculum of regular education and that children had the right to be acquainted with the right to a healthy environment. Natalia Novikova from “Fridays for Future” pointed out the necessity to stop perceiving ecology as a hobby, instead of as a compulsory school subject, and also raised the issue of how to motivate decision makers to start changing our joint future, asking “What is the point of getting education for a future we will not have?”.

The importance of connecting children with nature was especially stressed, along with the role of parents in developing their children’s love for nature and environmental empathy. Mina Mirić from the World Wildlife Fund pointed out that empathy for nature was the basis for building environmentally aware individuals. The representatives of children and youth agreed with that and said that “we must not resent Mother Nature, because it will come back to us two times worse.”

Prof. Vladimir Đurđević Ph.D. from the Faculty of Physics, University of Belgrade, speaking from the perspective of his multi-year experience in the field of climate change impact on the environment, emphasized the seriousness of this topic, believing that as a society we would have to face serious consequences of irresponsible behaviour. He pointed out that children and youth had a very high interest in environmental protection and that it was necessary for adults and decision makers to use that impulse and direct it in the right way. Ognjan Pantić from the Belgrade Open School agreed with that view and stressed the importance of supporting young people in their will and desire to protect nature.

Simon Ilse, Office Director, Heinrich Böll Foundation, Belgrade, expressed his satisfaction with the fact that the topic of environmental protection was gaining an increasing importance in Serbia, because, as he stated, “we do not have a planet B”. Referring to the constitutional obligation of Serbia to inform every citizen about the state of the environment, he pointed out that the Heinrich Böll Foundation sought to contribute to this through the Shadow Report of Coalition 27 which, although it did not contain a special section on children, obviously recognised the importance of children’s rights to a healthy environment.

The children and young people spoke about the degree of realisation of children’s rights from their point of view, about the importance of children being informed and launching initiatives in their schools and communities. They stressed the importance of the participation of children and youth in policy-making, the harmfulness of medical waste, deforestation, and the greenhouse effect. The children mentioned that they needed adults to believe in them and their readiness to be informed, educated and proactive, because, as Natalija Cvetković from the DX Club said, “by pointing out the problem, we do not criticise adults, but call for a common solution.”

Milena Banić, associate of the Child Rights Centre, presented the findings of the research conducted by the Child Rights Centre in March and April 2021 in order to map the challenges in the exercising of child’s right to a healthy environment in Serbia.  The research covered 432 children and young people 12-18 years old from over 20 municipalities and towns in Serbia. The research findings showed that children and young people considered that air and water pollution, poor waste management, illegal deforestation, extinction of plant and animal species, as well as food pollution, were the biggest problems of environmental pollution in their municipalities and cities. Over 80% of young people pointed to the problem of air and water pollution, and saw traffic, waste incineration, industry and the poor system of state control as the biggest causes of environmental pollution. The fact that only 20% of children and youth believed that there were enough parks, greenery and trees in the places where they lived is worrying. As many as 50% of respondents considered that children and young people did not spend enough time outdoors and in nature, and 55% believed that countries were not sufficiently committed to fighting the climate crisis. In addition, the research showed that children and youth were not sufficiently recognised in the strategic policies related to the improvement of environmental protection, or sufficiently involved in the local policy-making process. A series of strategic policies lack in this area, including policies for sustainable and child-friendly cities, sustainable nutrition, production and consumption as well as climate change and noise protection.

At the very end, Prof. Nevena Vučković Šahović, President of the Child Rights Centre’s Board of Directors, summarised the conclusions of the conference, referring first to the obligations of Serbia undertaken by ratifying the UN Convention on the Rights of the Child. She noted that the first necessary step was to map the situation in the field of child’s rights in Serbia in order to establish the level of harmonisation of national and international laws. She pointed out that an important precondition for respecting the child’s right to a healthy environment was passing the Law on the Rights of the Child, the draft of which included the section on the protection of child’s rights. It was also necessary to analyse the judicial practice and initiate a multisectoral dialogue at all levels. It was important to motivate decision makers, because young people were ready to get involved in the process of change, because, as Olga Dević, a member of the CPD Board of Directors and of the DX Club, said “when, if not now?”.

The conference was held as part of the project “Children’s Rights in Policies and Practice” implemented by the Child Rights Centre in partnership with Save the Children International, and funded by the Government of Sweden.

The recording of the conference is available on the CPD’s Facebook page.