The Child Rights Centre held a conference celebrating the 20th November, the date when the Convention on the Rights of the Child was adopted at the United Nations General Assembly in 1989. The Convention on the Rights of the Child is the most significant international document on the rights of the child and the most widely ratified human rights treaty in history. The Child Rights Centre celebrated the Universal Children’s Day with the aim to draw attention of state bodies and general public to all obligations that we have undertaken towards the full realization of the rights of the child as a society and presented the level of implementation of the rights of the child in Serbia in 2018.  The event was also dedicated to highlighting the importance of introducing an explicit legal ban of corporal punishment of children in all settings and of positive, non-violent and participatory ways of child’s upbringing.

The conference was organized as part of the project “Child Rights in Policy and Practice” implemented by the Child Rights Centre in partnership with the Save the Children International, funded by the Government of Sweden.

The key note speakers were the following:

Ines Cerović pointed out that it is crucial to improve children’s human rights in all areas and that it is necessary to implement the initiated actions when it comes to enactment of relevant legislation and policies and strengthening of institutions that safeguard the rights of the child.

“We received 34 recommendations of the United Nations Human Rights Council in January 2018 relevant for improvement of the rights of the child.  A number of initiatives were initiated at the beginning of the year, certain working groups to amend the existing legislation have been established, but their adoption has not yet taken place”, Ines Cerović said.

Speaking about discrimination that children are exposed to, she emphasized the importance of more efficient implementation of the legal framework: “There is a need for additional trainings of professionals from different systems, better access to education, healthcare and housing for all children. Among the most vulnerable groups of children are Roma children, children with disabilities and children in rural areas – especially in the fields of education, community life and access to services and information “, the director of the Child Rights Centre explained.

The introduction of an explicit legal ban of corporal punishment of children in all settings is still an actual topic in public in Serbia, and according to Vera Despotović, parents often resort to severe disciplining of their children due to lack of inadequate support and guidance in the period of child upbringing, especially in period of adolescence.

“Parents do not want to torture their children, but they do not know how to react in certain situations. They need additional support and consultations to learn how to deal with their children in situations when certain problems arise”, Vera Despotović said, adding that, once that the legal  prohibition of corporal punishment is enacted, it will be more challenging to provide assistance and support to parents in finding alternative and more humane ways of disciplining children.

“Corporal punishment creates a cycle of violence and culture of violence in the society, which has been long present in our society. We are still dominated by attitudes that minimize corporal punishment, seeing the child as a passive subject of socialization. Some parents see children as their own property”, warns Vera Despotović.

Kosana Beker pointed out that it is distressing to talk about corporal punishment of children in 2018, and that it is worrying that recognized experts still justify this type of child upbringing in the media. She added that, despite the existence of numerous laws prohibiting violence against children, various interpretations lead to the fact that children are still being corporally punished, without consequences.

“What message is sent to children? No one can touch you in school or in the street, but when you get home, then you get beaten up and there is no one to protect you. It is confusing. Therefore, in order to avoid any misinterpretation, it is important to adopt a provision in the law that explicitly prohibits that no one should mistreat children”, Kosana Beker concluded.

It was also emphasized that when we talk about the prevention of violence in society, we have to join forces and act in a comprehensive manner, that is, the state should take an official stand on this issue so that there is no room for discussion whether corporal punishment is violence or not. We also need to stop with practice of sending double messages to children that in some systems such as education violence is forbidden, whereas in other environments such as the family, this is a common form of behaviour. 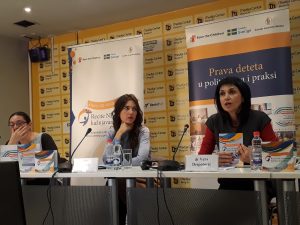 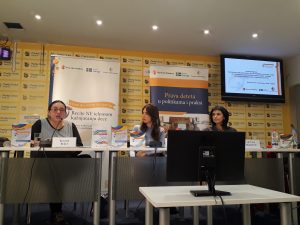 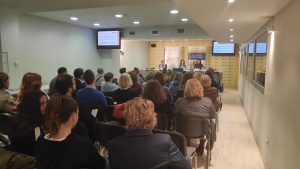 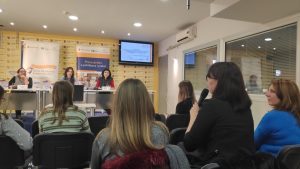 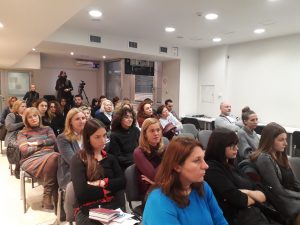